Babu and Arif have been friends from childhood. They went to school together, played on the same cricket team and had no secrets – except one, but only until recently. While they were out having phuchkas at a street stand somewhere in Dhaka, Arif suddenly slipped into an awkward silence for a couple of seconds.

“Babu, shon, toke amarkichubolar ache… Listen, I want to tell you something…”

“I haven’t been fully honest with you… Remember when I told you that I really like that girl? That wasn’t quite true. It’s actually her brother I like. I am gay.”

Babu, shocked at the unexpected confession and not quite sure how to respond, got up and walked away. No matter how often Arif tried to call Babu in the following days, there was no response. Six months went by until Arif finally got a call back from Babu. Today, after many evenings of long talks, they are best friends again. Babu realised that Arif being gay does not take away anything from the childhood memories they share and the good times they experienced together. Babu learned to accept Arif for who he is – his closest friend… who happens to be gay.

Lesbian, gay and bisexual (LGB) people are our brothers and sisters, our friends, our neighbours, our teachers and our colleagues. Homosexuality and bisexuality have been part of every society and every culture, at every point in human history, and have also been found in a wide range of non-human animal species. Different surveys around the world have found that between one and ten out of 100 people are sexually or romantically attracted to members of the same sex. Using the lower end of this range, we find that a minimum of 15 lakh people in Bangladesh are homosexual or bisexual. Despite this large number – which is roughly equivalent to the entire population of Qatar and could actually be up to ten times as high – LGB people are an invisible minority.

Many face discrimination at school, university and their workplace, are denied access to health care and justice and, being torn between fear, confusion and guilt, find little support from family members and friends. Section 377 of the Bangladesh Penal Code makes same-sex intercourse a crime punishable by imprisonment for life. Consequently, only few are open about their sexual orientation, while most are forced to live a life of secrecy and lies, conformed to bigotry, misguided notions of honour and caricatures of justice and morality. With heterosexual marriage still being considered a woman’s nirvana, the level of tolerance for lesbian women is particularly low – they are doubly marginalised.

In 2002, the Bandhu Social Welfare Society (BSWS), the largest association working with men who have sex with men (MSM) in Bangladesh, surveyed 124 self-identified kothis, feminine homosexual or bisexual men and arguably the most visual part of the local LGB community. One in two respondents stated that he had been the victim of harassment at school or college. Three in four respondents who told their relatives about their sexual orientation stated that “their family had reacted negatively with beatings, forced marriage, disinheritance, throwing [them] […] out of the house, [or] taking them to doctors for curing them of homosexuality […].” Many had been sexually abused, raped or harassed by law enforcement agents, mastaans (local thugs), friends and family. Twenty-nine of the 80 respondents who reported harassment by law enforcement agents told BSWS that police officers had sexually assaulted or raped them. The others talked about beatings, extortion of money, obstruction of movement, threats and blackmail. Men in “Mymensingh, Dhaka, and Sylhet reported […][that they had been] rounded up, […] taken either to police barracks or the police post and raped by groups of policemen. Such forced sex was always reported as being unsafe […] and often results in serious physical injury like a ruptured rectum, internal haemorrhage, etc.” A 2003 Human Rights Watch (HRW) report shows that these incidences are not unusual but follow a pattern of violence against LGB people in Bangladesh.

The endemic homophobia in Bangladesh also has a negative impact on the mental health and well-being of LGB people. A recent study of 102 homosexual men conducted by University of Dhaka professor Muhammad Kamruzzaman Mozumder et al. found that 32% of these men had a history of suicide attempt, while 47% reported that they had considered committing suicide at least once.

During a visit to Dhaka in December 2011, I met up with Mamun (not his real name) and Shakhawat. Mamun is a 23-year-old student, Shakhawat a 26-year-old journalist. Both identify themselves as gay men. 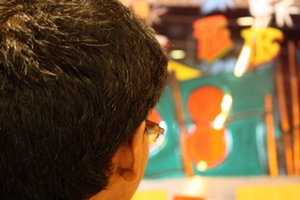 Mamun describes accepting that he is gay as “the hardest thing [he] ever did.” When he first felt physically attracted to other boys at the age of 13, he thought there was something wrong with him and hoped it would change. When it did not change, he thought he would just marry and hide his sexual orientation for the rest of his life. Then he started doing research on homosexuality on the internet and found that it is accepted and considered normal in other parts of the world. It took him another six years to fully accept that he is gay. Today, he thinks daily about leaving Bangladesh, pessimistic that attitudes towards LGB people will change within his lifetime. “I love my country and my family but I want to live a normal and free life. I don’t want to live a life full of lies. I will never live a straight life. I would rather stay single for the rest of my life – I do not want to destroy the life of a girl.” And even though he considers his parents to be relatively liberal, he is afraid that the day might come when he has to choose between them and living an authentic and dignified life. 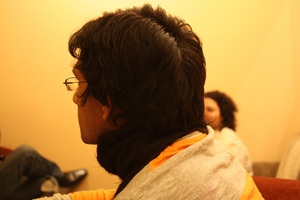 Shakhawat felt romantically attracted towards men for as long as he can remember. Living apart from his family from an early age, he found support in Dhaka’s gay scene. He became a member of Boys of Bangladesh (BoB), a platform for gay men, and learned a great deal about the psychology and politics of sexual orientation. Shakhawat has been in a steady and committed relationship with another man for four years. He wants to stay in Bangladesh to raise awareness for LGB issues.

After returning to the United States, I got in touch with 23-year-old BBA student Farheena (not her real name) through a Bangladeshi online forum. She has known that she likes girls from early childhood and identifies herself as a lesbian woman. Fearing that her parents might disown her, she has not come out to them yet and keeps her current relationship with another woman a secret. Unlike Shakhawat, she has not been able to find a platform for people who share her sexual orientation that she could turn to for support. Farheena told me that there is more pressure to get married early on women than there is on men. “If I do get pressurised into marrying a guy, I may just commit suicide. I would rather be dead than being someone I am not.” She thinks about moving out of the country after she graduates, hoping to be able to be who she is elsewhere.

For all of them, the internet has been an invaluable source of support and advice, and played a significant role in their acceptance of who they are. Their advice, in particular to LGB youth, is to use the internet to get as much quality information as possible – great starting points are itgetsbetter.org,facebook.com/LGBT.Bangladesh and Wikipedia –, and to connect with other LGB people. Unfortunately, access to the internet is still a class-privilege in Bangladesh and, hence, only available to some.

Sexual orientation is neither, as sometimes mistakenly assumed, “a choice” nor “a disease”, but a normal aspect of human sexuality. Homosexual relationships, just like relationships between men and women, are natural and healthy forms of human bonding. A person’s sexual orientation is part of who that person is, and everybody deserves to be respected for who they are. LGB people, hence, do not demand special rights but the recognition of their human rights. Cultural or religious norms that disfavour homosexuality no more justify discrimination against LGB people than norms of this kind can justify racism or sexism. Bullying and harassment, denying LGB people equal opportunities and respect, or prosecuting citizens for who they are is neither pious nor cultured but immoral.

Sex between consenting adults is an inherently private matter and should not be regulated by the government of a society that values tolerance and respect, yet Section 377 does exactly that. Section 377 contradicts the fundamental principles of dignity and equality, and violates international human rights law. It reinforces social stigma, encourages wrongful discrimination, undermines public health efforts and is based on nothing more than prejudice. A report published by the Bangladesh Ministry of Law, Justice and Parliamentary Affairs states that Section 377 “violates [the] constitutionally protected right to privacy under the expanded definition of right to life and personal liberty […].” Supreme Court Advocate Sara Hossain further sees Section 377 in conflict with the anti-discrimination clause and the right to equality before the law guaranteed by the Constitution of Bangladesh.

Even though Section 377 has rarely been used, it is for the LGB community what the sword was for Damocles and we should not wait until the bigoted and the intolerant discover it as a tool of repression against an unpopular minority. Repealing Section 377 is an integral step in the development of Bangladesh as a free and democratic nation. A repeal would make it possible for LGB people who are victims of rape to make a complaint without putting themselves at risk of prosecution, and seize a weapon from police that is systematically used to harass, abuse and blackmail sexual minorities. Even though Shakhawat is not afraid of being prosecuted, he is still a criminal in the eyes of the state – “and it doesn’t feel nice.” As an LGB rights advocate, he believes that a repeal of Section 377 “would give the LGBT community better visibility by making it easier for people to come out.”

Farheena, Mamun, Shakhawat and other LGB people deserve our attention and support. While the LGB community must form part of the leadership in the struggle against bigotry and injustice, it is the moral responsibility of all of us to add our voices and embrace tolerance and respect for the equal worth of all people.