In the last installment of this series, I wrote about the Great Pyramid of Khufu at Giza. About a century before its construction, the title of the tallest man-made structure in the world was held by the stepped Pyramid of Djoser at Saqqara, which is located about 30 kilometers south of Giza. The Pyramid of Djoser was built during the 27th century BC for the burial of Pharaoh Djoser. It is the first Egyptian pyramid ever built, and a cornerstone in the history of human civilization. Time is slowly turning it into rubble and dust, and a team of Egyptian and British experts is battling to save it. Hence, understandably, tourists are not allowed to enter the pyramid. We did get a chance, however, to go inside the nearby Pyramid of Teti, which too is part of the ancient Saqqara burial ground. Time has not been kind to the upper part of the pyramid. Today, at first glance, it looks like no more than a small hill. The chambers and corridors below the ground, however, are in an exceptionally good condition. We marveled at the hieroglyphic text engraved in the walls of the burial chamber, which tell stories of a time long gone. It is believed that King Teti was murdered by his bodyguards. The reasons for his murder are unknown to this day. 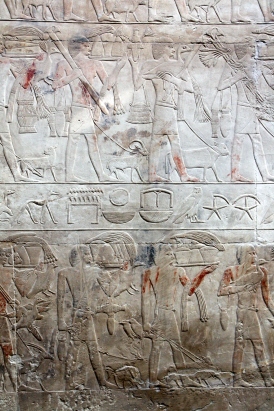 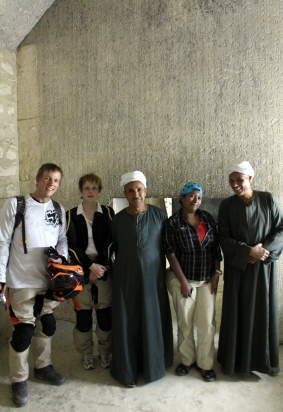 Hieroglyphic text in the burial chamber of the Pyramid of Teti 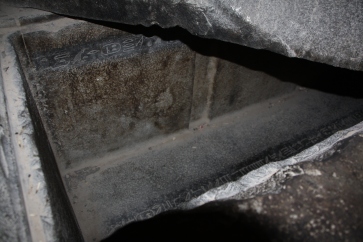 After spending five days in and around Cairo, we headed east through the desert and then south along the Gulf of Suez, to Hurghada, where we spent the night. From Hurghada, we rode to Luxor in the country’s interior. After a brief visit to the Karnak Temple Complex there, and another night, we followed the Nile south, and reached Aswan on the 21st of May. Aswan is Egypt’s ancient southern frontier, and one of the driest places on earth. The average rainfall per year is less than a millimeter. We spent our first night in Aswan at Adam’s Home, a campsite on the edge of the Sahara desert. The cold of the night gave way to almost unbearable heat as soon as the first ray of light struck in the early morning. It is true what they say about the extreme differences between day and night temperatures in the desert. The remaining nights, we spent at a more comfortable place, a simple hotel in Aswan’s souk.

On the road from Cairo to Hurghada

On the road from Cairo to Hurghada

As we were waiting for our tickets for the Lake Nasser ferry from Aswan to Wadi Halfa in Sudan, we had some time to explore. We hired a felucca, a traditional wooden sailing boat, that took us across the Nile to a Nubian village, and to the Aswan Botanical Garden on Elnabatat’s Island. We also did some culinary exploration, and it was in Aswan that I think I first had kushari. Some sources claim that the popular Egyptian dish was inspired by the South Asian dish khichdi, which is commonly known as khichuri in Bengal. The main ingredients of kushari are rice, macaroni, tomato sauce, vegetable oil, onions, cumin, and lentils. Some people add chickpeas or spaghetti. Usually, kushari is vegan, as are fūl and falafel, two other popular dishes in Egypt. Regardless of whether or not you, too, are a vegan, I bet you will love the food in Egypt! 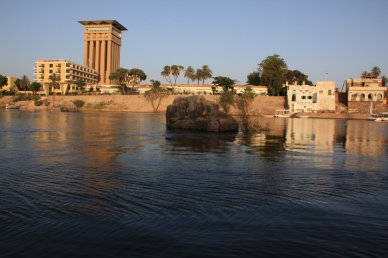 River Nile at Aswan at night 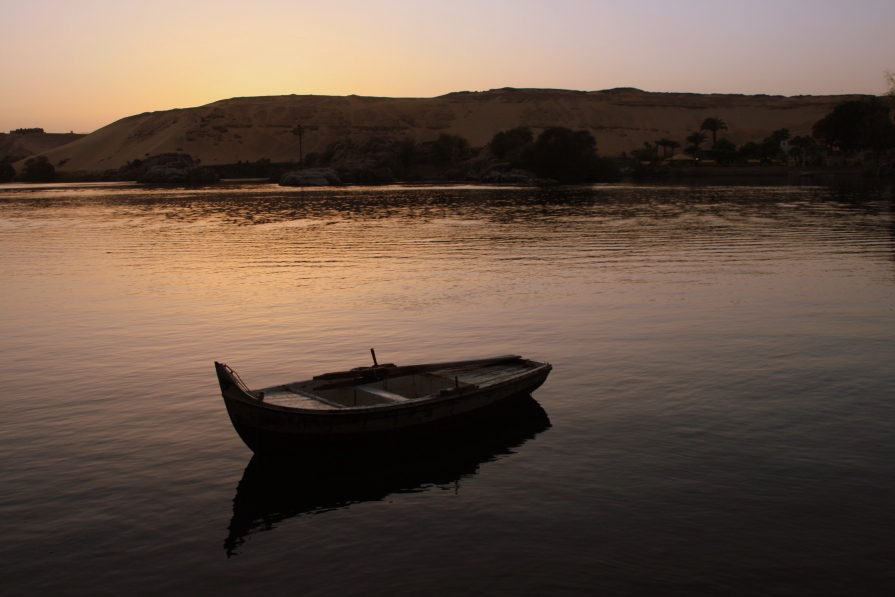 Part 1: From Germany to South Africa: The journey begins
Part 2: A millennium of Islamic scholarship, and a revolution yet to be completed
Part 3: Stories of a time long gone, and Egyptian khichuri
Part 4: An oasis of hospitality in the searing heat of the Nubian Desert
Part 5: The Simien Mountains, and the first hijra in Islam
Part 6: Stranded in the Kenyan desert, and a visit to the land of the Maasai
Part 7: “Welcome to Africa!”
Part 8: Victoria Falls, and free-roaming lions in Botswana
Part 9: South Africa: The Rainbow Nation
Summary: My Germany to South Africa Motorcycle Expedition 2011